The irresistible beauty of flowers can be enhanced only by the way its arrangement in an artistic manner. Floral arrangements are a major element of the atmosphere of any given event whether flowers for Mother’s Day, a wedding, party, religious ceremony, or any other occasion in life.

Our good friends at Fresh Flowers, the online florist Sydney residents love, gave the Wild Oak team these tips on the care of cut flowers for our readers.

The arrangement of flowers and foliage in baskets, vases, garlands, and other centrepieces using meticulously organized designs and matching colours is known as the art of flower arrangements. Floral arrangements should be a part of daily life and not reserved for special occasions as flowers can bring colour, beauty, fragrance as well as decoration to any formal or casual occasion. 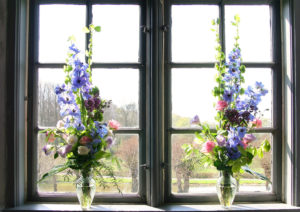 Flower arranging is an art traceable from its roots back in Egypt. As early as 2800 BCE, Egyptians have been involved in floristry not just as a business but also as parts of their religious ceremonies.

Ancient Egyptians were traders who produced floral goods like wreaths, garlands, bowls, and other centrepieces. Florists were ordered by Egyptian royals to design these goods and organise burial processions and other ceremonies where flowers like roses, poppies, violets, jasmine were used. However, among all the flowers, the lotus blossom also known as water lily was given the highest regard. Lotus was often compared to the Sun god and used in tributes for the dead and as part of garlands for rituals and ceremonies.

The flower arrangement was a luxury only the Royals could afford, and they used flowers extensively for styling baskets and even vases. A systematic pattern can be observed in the flower arrangement design of the Egyptians. The flowers used within vases and garlands had a consistent design which was orderly, and the use of a supporting stick is followed till today.

At present, use of floral designs can be found extensively in Egyptian history through their culture, paintings, crockery, and architecture like walls of tombs dating back to the fifth century to Cleopatra’s time. 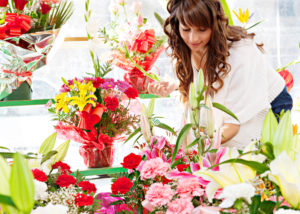 The Greeks and Romans

The Greeks and Romans used flowers more lavishly as compared to Egyptians. A higher significance was given to fragrance over the shape and colour of the flower. Flowers were part of not only religious rites and ceremonies but also a major part of the attire of the Greeks and Romans. Plants like olive branches, laurel, ivy, roses, etc. were part of royal processions, military victory, wedding proceedings, and every festival.

Olive crowns and laurel wreaths were a symbol of royalty and power as they were awarded to leaders, soldiers of high ranks, poets etc. Roses were given high regard due to their overwhelmingly strong fragrance, hence they were used extensively at meals, banquets. Furthermore, the women used flowers lavishly in their hair, for perfumed wreaths, and every citizen wore flowers on ceremonial occasions.

Flowers have been used for preparing medicines in China and as part of their religious teaching culture, since 207 BCE. In China, being a florist meant the position of profound respect and honour. Buddhism, Taoism, and Confucianism practitioners placed flowers on religious altars and even embodied flowers into their paintings, embroidered clothes, crockery as well as their scrolls and religious texts.

Since Buddhism forbids taking the life of a living creature, flowers were used sparingly for making baskets and other floral arrangements. The bamboo, pear, and peach trees along with the tiger lily, orchid and pomegranate were held in high regards and considered symbols of fortune, wealth, and status.

Ikebana, which is one of the most popular Japanese flower arrangements, has been practised since the 7th century. The main principle of ikebana is minimalism or using the least number of flowers and not wasting even the stalks and leaves. The word “Ikebana” comes from the words “ikeru” meaning arrangement, and “HanaI” meaning flower.

There is a profound philosophy behind Ikebana arrangement of flowers, and the said arrangement has been divided into different schools over the centuries. When done with decorative purposes in mind, ikebana can be divided into Moribana, which is the decoration of flowers in a shallow dish, and Nageire that is decoration using a tall vase. There are several other arrangements, which vary depending upon the ceremony or the occasion.

In the medieval period, floristry was limited to the churches and monasteries. The shreds of evidence suggest that during middle age the arrangements of flowers included vases and garland and was normally preferred to freshen up the atmosphere. The middle age or dark age did not allow the art of floristry to extinct but of course, did not promote it as a culture. However, coming down to the modern period, it is evident that the culture of floristry has come out of the hibernation and has been a part of every glorious and extravagant celebration.

The Wild Oak team would like to thank Fresh Flowers for their assistance with this article and recommend them if you are wanting to order flowers for delivery anywhere in Australia! You can learn more about them and their services by visiting their website here:  https://www.freshflowers.com.au